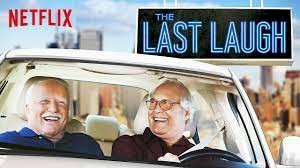 Have you seen the Netflix movie The Last Laugh? If not, you should check it out. Yes, I know, Rotten Tomatoes gave it only 57%, and the audience liked it even less. But I assure you, that’s because they didn’t understand what they were watching.

As the characters romp through this road-buddy story, they pose an issue that few movies have yet dared to explore with such honesty.

What makes for a great old age?

It’s not Botox. In The Last Laugh, the protagonists, played by Chevy Chase, Richard Dreyfuss and Andie MacDowell, are not pretty or some Hollywood version of old. The brave cast allows themselves to appear wrinkled, bald, pigmented and fat on screen. But it doesn’t matter to any of them.

There’s a highly attractive comfort that comes with knowing people for many years—a Dorian Gray effect in which people never change in appearance, no matter the toll aging takes. The characters in the movie are blind to each other’s wrinkles and aware only of their relationship.

In addition to accepting, and maybe even applauding, how decrepit oldsters can look and still have a good time, The Last Laugh parodies the opulence of the real estate phenomenon we call “The CCC”—Continuing Care Community—where Chase and Dreyfuss remeet after many years of separation.

I’m fascinated by the movie set, especially the paradisal trappings of the congregate spaces. It’s beyond real.

The chandeliers are beautiful, the table settings lovely, the people nice, the entertainment nightly. Just like on a cruise. And that is exactly how marketers, operators and developers see the assisted ivory tower that they offer folks over 80…a never-ending land-bound cruise ship.

Ever since the 1960s, when Delbert Webb, co-owner of the New York Yankees developed Sun City, this has been the Gold Standard for aging.

Yet, the big question as the senior-housing industry looks toward the future is, Will boomers want to come here? Why are older folks wanting to age at home if possible when we are offering them heaven on earth?

In my eBook, Breaking the Mold, written with Disneyland and Disney World’s landscape architect, a leading spa designer and an architect of many senior communities, we explore ways to infuse the built environment with opportunities for genuine life engagement.

Yes, “life purpose or engagement” are current buzzwords, but it’s a start to what we hope will be a revolutionary change on how we see old age…a time for greater contribution, not less. But environments cannot be age-friendly until the people in them, including the elders, believe that age does not mean loss of potential. (You can read more the latest thinking in senior environments here.)

The Last Laugh turns this notion of conquering life rather than surrendering to it into a light and funny story.

Dreyfuss is Buddy Green, a former standup comic who was once invited to appear on “The Ed Sullivan Show,” no less. He gave it all up to become a podiatrist. Chevy Chase plays Al Hart, his agent, who simply never wants to stop working.

They plan their escape from paradise with care, hiding from loving children who are hell-bent on “protecting” them in paradise.

Their agenda is for Buddy to get on top again and perform on “The Late Show” in New York. They travel from town to town with Buddy gaining ground as he makes folks across America laugh.

Only one problem: Buddy is dying. Was this necessary? In an ageist world, it is.

You see, the road trip was a success. “Don’t call us old people. That’s offensive. We prefer the pre-dead.” Buddy had the potential to permanently stay on the road…at least as far as the audience was concerned. Old comedians were “hip,” and the audience loved him. But he is also old. Living a road-tripping life of excitement at the age of 80 simply does not fit with our concept of respectable old age.

So how do the film’s writers save this guy from the eventual humiliation he must face as he gets older and older, and the metaphorical entertainer’s road gets too tough to maneuver? Oh, I know. Give him a fatal disease.

No one wants to see him pass out on stage like Debbie Reynolds or lose luster like Groucho Marx or Bette Davis. Pancreatic cancer (“The doc gives me maybe three months”) makes Buddy’s moment in the sun finite, satisfying and less burdensome to all.

Messages are mixed. Buddy must cut his road trip short in order to “rot with dignity” whereas the film ends with a half-naked Al Hart enjoying his freedom from paradise with his artist girlfriend. This gives me a little more hope that the underlying theme of the The Last Laugh—freedom to choose how you end—is possible.

What form will older age take is the ultimate question?

Is the ideal the gated community for escape into a life of planned leisure? Is it a feisty escape from the escape? Can we envision third and fourth alternatives? As we rapidly increase our lifespan, how serious are we in creating better ways to spend our extra years?

And so, the issue rarely explored on the big or small screen, in books or in contemporary art is faced in this bit-of-fluff movie.

Should we be creating separate communities for aging? Should this be considered a reward or fancy incarceration? Should we look forward to living in a planned environment with every need met and no demands or expectations that we will continue to contribute and be productive? Is it healthy, desirable, wonderful, hideous? If that’s all there is for our long future, how can we escape?

In Breaking the Mold, I look at the Positive Deviant, the elder resident you can find in almost every traditional senior community…the outlier who thrives, contributes and refuses to surrender to the ease offered to him or her. You find them helping other residents, volunteering, traveling no matter what their health. My Aunt Rose, an RN, while suffering from cancer herself, helped a fellow patient be more comfortable.

At the end of each of my radio shows, I say, “Get out there,, kids and make it happen.” Thanks Buddy and Al for saying it with humor.