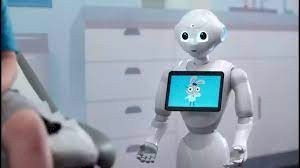 I plan to name my robot Jeanne Calment, after the French super-ager who lived to be 122. Jeanne will like to read British mysteries, go to theater and eat cheesecake while standing in front of a refrigerator (the calories are less that way.) In other words, she will be Mini-Me…my new bff robot who will hang out with me and help keep me safe as I age.

Jeanne will be one of the thousands of companion FriendBots developed for an increasingly aging and isolated population in which those in need simply require more time and attention than younger family members are able or willing to provide.

In addressing the crisis of elder loneliness, robotic scientists have come up with machines that use Artificial Intelligence in ways that go far beyond caregiving. For example, the interdisciplinary, international project Caresses, designs “Culturally Competent” robotic companions to which elders can relate. The robot learns your likes and dislikes…it speaks your language both linguistically and emotionally.

Soul Machines goes further in creating “emotionally responsive artificial humans.” Soul Machines have neural networks…which means they have virtual feelings, akin to humans. What’s more, they look like real people, even though they only exist through screen interaction, kind of like “smart” Facetime. How long before they develop a “Dead Relative Bot” so your long gone loved one can keep you company?

Even bots that do not look humanoid are designed to be relatable.

Vecna Robotics is repurposing a military robot, formerly called a Battlefield Extraction Assist Robot. By the time it gets to you, it will have a warm and fuzzy name and will be able to carry you to your bath or pick you up if you fall. There’s a good chance it will also laugh at your jokes.

None of this is science fiction. Paro a soft and furry robotic seal that provides therapeutic emotional support akin to cats and dogs for those with dementia, has been in use for years at a cost of $6,000. Elders take Paro in their arms, hug it and often cry to it. Joy for All offers robotic dogs and cats as companion animals for assisted-living residents. They sell on Amazon for $119.99. When I first saw a resident stroking one at a facility, it was so realistic-looking that I thought how nice it was that they let pets in.

Recently, The New York Times featured a full-page article on Zora, a companion robot, the size of a large doll which is being used to help dementia patients in 1,000 health-care facilities worldwide. Zora looks like the iconic sci-fi humanoid robot. Given the aging population and the difficulty many family members have in visiting frequently, “We need to help with loneliness,” said Tommy Deblieck, co-chief executive of ZoraBots. Many patients confide in Zora as they would a friend.”

As emotionally sad as it sounds, author and MIT professor Sherry Turkle, in Alone Together: Why We Expect More from Technology and Less from Each Other, postulates a new era of artificial relationships that will be available 24/7 to fill in gaps that humans won’t be able to provide since there simply will be too much demand for support from the growing elderly population. Critics of FriendBots worry that “the automation of emotional labor” will cause delusional behavior and may result in elders being abandoned by their friends and families to robots for affection. Nevertheless, it is doubtful that these concerns will interfere with the rapid development of elder-care robots.

You need only watch Robot and Frank or read Dan Brown’s Origin to understand how easily we can get attached to human-looking or sounding bots.

For example, ElliQ, from Intuition Robotics, is a $1500 desk top “helper,” slated for delivery by summer 2019. It bobs its plastic head and acts as a reminder companion for exercise, medication and digital socialization (FaceTime your grandkids). EllieQ is meant to evoke feelings of companionship with NO human intervention, called by its developers “your sidekick for happy aging.”

Even those put off by FriendBots seem to embrace CareBots, designed to do everyday chores for elders.

Luvozo’s robot SAM is a nurse’s aid that checks fall hazards and looks in on residents of nursing homes. Honda’s Asimo is a humanoid robot that serves meals and turns off lights. Panasonic’s Resyone looks like furniture but is a robot that transforms from a bed to an electric wheelchair, increasing patient mobility and eliminating the need for caregivers to physically transfer an individual to and from the bed.

Now, back to Jeanne Calment, my personal future robot.

If I ever become incapacitated, I expect Jeannie to dress tastefully and attend a matinee in my stead. Farfetched? Not at all.

Last September, I was brought to tears at the London Design Biennale by the installation featuring the work of No Isolation in collaboration with the Norwegian Cancer Society.

I sat next to a child-sized robot that attended school. An at-home student remotely manipulated the bot, spoke through it, interacted with friends, made the bot raise its humanoid hand and prompted the bot to ask and answer questions for the teacher.

I have no doubt that one day homebound elders will participate in many activities through their robotic surrogates.

And now for the real future of robotics and aging: We may all become robots!

What with knee and hip replacements, pacemakers, cochlear implants and medication chips, by the time we reach 80, many of us will be partly mechanical. So, we might as well go all the way. Check out OmniSkin, developed in The Faboratory at Yale University by professor Rebecca Kramer-Bottiglio. Omni Skin can be wrapped around soft bodies like a stuffed animal to make the item move. They are now developing OmniSkin clothing to give people robotic assists with mobility.

Conclusion: In years to come, robots will be more prevalent, cheaper and a greater part of your everyday life.

Do you remember the scene from The Graduate where Mr. McGuire whispers “plastics” in Ben’s ear, to instruct him on his future career? Now, come closer to me, closer still…closer. Listen, “Robots.” Enough said. That’s a deal.