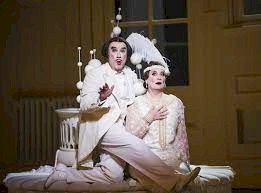 I’ve been hearing that only recently have there been juicy parts for actors of a certain age. Entertainment pundits cite the Netflix series Grace and Frankie, movies like Book Club and theatre like The Band’s Visit as proving that aging is finally “in.”

Bah Boo to the pundits.

It all began long ago, in the 1860’s, when a couple of blokes called Sir William Schwenck Gilbert and Sir Arthur Sullivan—let’s call them G&S—wrote the most popular musicals of their time.

Every one of their 14 extravaganzas gave leading roles and top billing to older actors. And their lyrics, music and story themes hum in our heads like a cultural ear-bug we just can’t shake.

Even if you never saw G&S operetta, you know them through hundreds of recordings, a multitude of movies, TV commercials, and more high school drama club performances than there are parasols in The Pirates of Penzance.

In fact, Gilbert, while still in his 20s, may have single-handedly created the concept of “anti-aging.” One of his illustrated stories for Fun magazine is called The History of the Gentleman Born at an Advanced Age. It was written well before F. Scott Fitzgerald’s The Curious Case of Benjamin Button and the contemporary Brad Pitt movie…and more than a hundred years before Botox. It portrays a frail, old man changing into a youth “as fast as he can.”

It’s no surprise that the very first G&S collaboration, Thespis, or The Gods Grown Old, finds the gods on Mount Olympus feeling their age.

Diana is too cold in her goddess sheers, Apollo can’t get out of bed, Jupiter is taking Life Pills (Geritol? Viagra?), Cupid wears a toupee. As a political commentary on aging politicians, Thespis is one of the most devastating send-ups. It is funny as hell. Although the music is lost, there are just now new adaptations, so you need not be deprived.

G&S were not always kind in their images of aging, especially when it came to older men lusting after younger women.

In The Sorcerer, an “old” man gets a young girl only because a love potion is released upon the town. In bewilderment she sings:

The old Judge in Trial by Jury gets the young girl, too, but only because of his money and power. He married, then dumped, the “elderly ugly daughter of a rich attorney” in order to ascend to the bench. This is both a satirical jibe on the English court system and a blatant acknowledgment of the personal foibles of older men.

When it comes to older women, the G&S canon is ruthless about our physicality.

It portrays sarcopenia (muscle loss and sagging skin) with both charm and devastation as The Lady Jane sings about it in the operetta Patience.

“She may very well pass for forty-three…in the dusk, with a light behind her” (Trial by Jury) reminds women of a certain age to stay out of bright lights—just as 1940’s aging film stars insisted on gauze over the camera lens and wore hats.

In The Pirates of Penzance, a play made into a pop movie musical in 1983, handsome young Frederic has never seen any woman except the 40ish Ruth. He wants the Pirate King to assess her looks.

The response is the most ageist compliment in all of theatre:

“There are the REMAINS of a fine woman about Ruth.”

To this very day we are apt to say (even of Helen Mirren) “she looks great…for her age.”

The Mikado (currently under fire as insulting to Asians) presents a lively homage to folks who are comfortable with their age.

Katisha, the tyrannical older woman, wants to marry the young, handsome tenor, Nanki-Poo. He is the exalted son of the Mikado.

Although she inevitably loses Nanki-Poo to the young Yum-Yum, a little maid from school, Katisha hooks up with the comic lead Ko-Ko, The Lord High Executioner (played by Groucho Marx in the TV version). He, in turn, wishes he could marry the young Yum-Yum.

They compromise, deciding they have a “very good bargain” in each other.

“There is beauty in extreme old age,” sings Ko-Ko. “Do you fancy you are elderly enough?” “Do you think you are sufficiently decayed?” (for marriage and sex)…whereupon Katisha asserts, “To the matter that you mention, I have given some attention, and I think I am sufficiently decayed.”

If you want commentary on long marriages, you cannot do better than to trot out a duke or a duchess. The Gondoliers gives us a hilarious and too true picture of how husbands and wives combine their skills as the years wear on.

In the melodrama Ruddigore, we experience the tender heartbreak of love that transcends age after the one we love passes.

I credit Sullivan’s music for making The Great Oak Tree (sometimes referred to as “There Grew a Little Flower”) an affecting love song rather than a campy ditty between an older woman and a ghost.

I’m hooked on G&S—and the truth is, that was the case even before I became old enough to pass for forty-three in the dusk with the light behind me. And, although I wasn’t “Born at an Advanced Age,” I am, like that gentleman, unaccountably getting younger every day. How about you? Go see some Gilbert & Sullivan—it will help you get there. Better yet, if you are smitten as I am, make plans to enjoy the International Gilbert and Sullivan Festival.