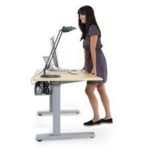 I probably don’t have to convince you that prolonged sitting is not healthy, but I do want you to be aware of how bad it truly is and why.

People who sit for prolonged periods increase their risk for premature death caused by resultant poor circulation and heart disease. For example, blood can start to pool in the legs after just one hour of sitting, preventing sufficient blood flow to the rest of the body. That’s why you are told to stand up at least once every hour and walk around on long-distance flights.

But wait, there is more. Sitting can make you fatter.

Ah…now I have your attention. Yes, there is a behavioral link between sitting and other poor health conditions. While sitting itself does not cause obesity or related conditions such as diabetes, obese people sit more just as a matter of lifestyle.

Studies have linked inactivity with being overweight or obese, having type 2 diabetes, some types of cancer and early death. And sitting for long periods is thought to slow the metabolism, which affects the body’s ability to regulate blood sugar and blood pressure and break down body fat.

I know what you’re thinking. Look, Adriane, I have to sit for my work, and so do most people. Is prolonged sitting that bad?

Yes, it is. My father died at age 44 because of too much food and too much inactivity. They tend to go hand in hand. Dad spent his early years sitting long hours as a kid in Yeshiva. During WWII, he was deployed to the Brooklyn Navy Yard on desk duty, making blueprints for ships. When the war was over, he decided to become an accountant and an attorney. He sat all day working and went to night school for eight years to get his degrees. By the time he graduated, he was diabetic and unable be very active. His sudden heart attack took him away at age 44.

When I reflect, his habits were not much different from today’s lifestyle of working at a computer and relaxing in front of a TV or other device.

I believe that movement would have saved his life…and given me someone who could have seen me graduate and walk me down the aisle.

Judy Foreman, one of the world’s leading proponents of exercise in her seminal work Exercise Is Medicine: How Physical Activity Boosts Health and Slows Aging,agrees. I interviewed Judy on my podcast, Generation Bold Radio, and had one of the most motivating discussions of movement and aging I ever enjoyed. You can listen to us here. According to Judy, sitting is lethal! One chapter of her book is titled “Sitting Kills.” Perhaps we need a warning label on our chairs!

Oh, oh…I am a long-distance walker—who are you calling sedentary? By now, you might know I am a member of FreeWalkers, and I am able to walk upward of 30 miles (and yes, sometimes up to 50 miles) in a day. It’s exhilarating and wonderfully healthy. And yet…I still have a sedentary lifestyle. I am always working sitting down in front of the computer. And in this time of sequestration, my “chronic sitting condition” is aggravated. Six or seven miles of walking in a day does not make up for back-to-back Zoom meetings, watching Broadway on Demand and binging on random webcasts that make their way into my in-box.

And the geroscientists would agree. Geroscientists, the researchers studying aging and longevity, now know that telomeres, the portions of DNA that sit on the ends of chromosomes (like the caps on the ends of shoelaces), keep DNA from unraveling during cell division. As we get older, our telomeres get shorter. While this is not the whole key to longevity, you want to keep those telomeres long.

Prolonged sitting may have a severely adverse effect on telomere length. In a Swedish study, researchers recruited sedentary, overweight men and women, all aged 68. Half the group began an exercise program and sat less.

After six months, the group that had started exercising showed remarkably longer telomeres than their counterparts, whose telomeres naturally shortened. But here  isthe fascinating part—exercise, per se, was not the deciding factor. It was sitting less. As researchers tracked the group that did the exercise program, they found that the people who stood up more often appeared to show the most lengthening of the telomeres. Lesson learned—even if you exercise, you are not exempt from the need to get up from your chair throughout the day.

And when you are sitting, you may have to sit differently.

One habit that we can change that helps with the hours of sitting is to be conscious of our posture while we sit. According to posture expert Esther Gokhale, creator of the Gokhale Method for back care, sitting correctly goes a long way to good health. Since childhood, we were taught to sit up straight, shoulders back. Gokhale says that sitting in that position winds up arching our backs and tensing up our muscles. Plus, sitting straight can restrict the blood supply to the back. After sitting upright, people are likely to slump again after a few minutes when they get tired. Instead, Gokhale says that people should sit in a relaxed way and use a back pillow if they naturally tend to slump too much.

1. Think of your day as if you were on a plane to Australia—it takes nearly 24 hours. Mark in your calendar or set a timer or smartwatch to remind yourself when you should get up from your chair, walk around, stretch, then walk again. Do this at least once an hour. Also mark every 15 minutes for taking a stretch—ask Alexa to remind you if you have the device.

2. If this is hard for you and you have the budget, consider using movement-focused chairs that induce movement while sitting. Check out the Swopper and Muvman chairs and stools ($450 to $600). I bought a ball chair on eBay for $50, and I perch on it while I am on the phone to break up my sitting day.

The above ideas may seem obvious. But are you “doing it”?

If not, consider your daily habits. Could you…

One last habit to embrace—dance.

I told my daughter that my song pick for her February 2021 wedding is “I Hope You Dance.” For me, that song expresses my philosophy of life and my wish for the happy couple.

But did you know that the National Institute on Aging is conducting at least two clinical trials on dance and Alzheimer’s prevention? It’s also a great anti-aging habit. You don’t have to be graceful to age gracefully. Check out Generation Bold Radio show #87 for my interviews with NIA researches that include dance and health.