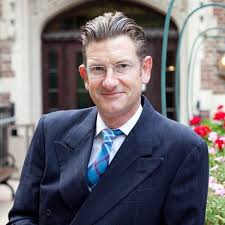 Gus was born in 1969 in Dundee, Scotland. He grew up in Duns, in the Scottish Borders. In 1992 after graduating from the University of Stirling, Gus moved to Chicago where he worked for the British Consulate General Chicago for 7 years. During this time he concentrated on developing UK-US trade and investment. In 1999
Gus completed a Business to Business Marketing Strategy course at Northwestern University's Kellogg Graduate School of Management. Following 1999's devolution of government authorities in the United Kingdom, Gus established and operated the first overseas office of the Welsh Assembly Government in Chicago. Gus took his current appointment in August 2004.
Gus serves on the Boards of the Admiral at the Lake and the Rotary Club of Chicago (ROTARY ONE), the world's first Rotary Club.
Gus is a core member of the Chicago Cultural Alliance and is a member of the President's Circle of the Chicago Council for Global Affairs. Gus's interests include playing music and golf and supporting Newcastle United Football Club.