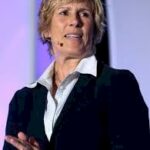 On September 2, 2013, at the age of sixty-four, Diana Nyad became the first person to swim from Cuba to Florida without the aid of a shark cage, swimming 111 miles in fifty-three hours from Havana to Key West. In the 1970s, she became known as the world’s greatest long distance swimmer with her open-water achievments, including a record-breaking swim around Manhattan.

For the next thirty years, Nyad was a prominent sports broadcaster and journalist, filing compelling stories for National Public Radio, ABC’S Wide World of Sports, and others. She is the author of the upcoming memoir, Find a Way, and three other books, is a national fitness icon, is a talented linguist, and is one of today’s most powerful and engaging public speakers.