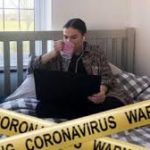 My mother’s favorite sibling was her eldest brother Julie. I believe even at age 90, Mom still had a younger sister’s crush on him. Julie outlived every one of his five brothers and sisters except my Mom, who was 20 years his junior.

You could say that Julie had what geroscientists would call the “Methuselah” gene.

Julie lived to be 97 after a life of drinking, smoking, carousing and generally doing nothing at all we now consider good for longevity. Julie would have been a great subject for researchers studying why some folks live so long doing all the wrong things. His DNA let him get away with it all.

Julie was a lad during the Great Depression of 1929 and the breadwinner of the family even though only a young teen.

He made the money necessary to keep seven mouths fed, as his ailing father—my granddad—could not provide enough without help.

Now, you must understand that Julie brought home the bacon by questionable means. Even as a very young man, he drank…and when he drank, he beat up other men, and he always won. His amateur boxing matches were the least of his money-making endeavors. Julie was soon noticed by local organized crime, and he was, as family lore has it, a bag man, a collector and generally a character you would see in a 1940’s movie—a likable thug.

Julie was Jewish but had a career advantage among the criminal underground. He looked like a handsome Irishman—tall, red-haired and often affected a brogue. His James Cagney act, although he was considerably taller, was calculated to get the girls. And at this, he was very successful.

One of the ladies he courted was a young Jewish beauty named Minnie. They married and had one child, Daniel—big and handsome like his Dad, but gentle and caring like his Mom. Julie left them both for other women many times, a stint in the Merchant Marines, gambling streaks and several short jail sentences.

The distraught long-suffering Minnie died early—no one knows of what. Like Lady Hamilton, perhaps of a broken heart. As in a 1940’s movie in which Julie could have starred, his son Daniel became a cop, then a detective, then a decorated detective, all as a foil to his father’s outlaw life.

When Julie descended on our house after months of being who-knows-where, it was never good. He and my Dad were oil and water, alter egos like Sherlock Holmes and his nemesis Professor Moriarity. My dad was no fighter. He was obese, cerebral and, for his size, physically timid. Julie was no great thinker. He was never educated and had poor reading and writing skills.

They both secretly admired and not so secretly harbored animosity toward each other. They saw in each other what they, themselves, lacked. In between them was my mom, who to my father’s dismay, asked him not only to be “nice to Julie” but to help him out with “a couple of bucks.” Dad, out of his love for my Mom and loyalty to her family, always doled out.

One thing I recall Julie saying has served me well all my life. After he insulted my dad for the hundredth time, even my smitten mom got pissed off and reminded Julie that my Dad was a prominent attorney and politician.

“So, what,” said Julie, “Throw a flowerpot out of the window, and you’ll kill 10 lawyers at the same time.”

As years advanced, that line helped me face crowds of people smarter and more accomplished than me. And no matter how many degrees I was awarded, it has kept me humble.

Eventually, as with all of us, Julie aged. As he moved beyond midlife, he met Ruthie. Ruthie was tall, awkward, older than Julie and, as my family said, “had some money.” She had never married, had no children and was in love with Julie. Ruthie couldn’t be persuaded that Julie was a lousy guy…although her family tried.

Who says you can’t change with age? Julie could—or at least for a minute there.

While in the Merchant Marines, Julie learned to cook. So Ruthie bought him a bar and grill in a remote part of Long Island, New York. One day, my Mom and I took the trek to Blue Point (God knows how we got there). But when we arrived, we were impressed.

Julie knew how to slice a brisket and roast a ham. Ruthie was not Jewish and insisted that ham sandwiches would be the making of the restaurant, and she was right. Julie’s mixed drinks were just right, too. Miraculously, Julie himself had stopped drinking. Wow…what a turnaround!

Or so we thought.

Decades passed, and my dear Aunt Rose, second youngest of the siblings and for whom my daughter is named, passed away sadly at age 62.

A glitch in the legal deed to the house left my mom the house—but  equally with all living descendants of my Aunt Rose, including their other siblings, instead of to my mom alone.

Now, my mom had lived in that two-family house with Aunt Rose since mom was in High School. My dad tried to buy a new house when he was in the chips, but no. My mom loved that house and would never leave. Mom and dad lived there during their whole married life (shortened by my father’s sudden death at age 40). I lived there until age 19, when I left for NYU Law School.

There was no doubt that Aunt Rose intended that my Mom get the entire house and stay as long as she wanted. When the incorrect wording in the deed messed up my mom’s inheritance, it was left to me to ask the other inheritors to give up their share.

If Julie said yes, all the others would follow. So I called him at the bar and grill. The conversation was short…

Me: Hi, I guess you know why I called you.

Me: The lawyers must have told you that you inherited a portion of Mom’s house, but you know it would kill her to move out. So, will you waive your inheritance?

None of the inheritors wanted to live in Aunt Rose’s old apartment, and my mom had no money to buy them out. So they forced her to sell it to a stranger and leave. I can remember her trying to pull Rose’s old mattress down the steps to the garbage with no help from anyone, certainly not her beloved brother Julie.

My Mom did move out, and it all turned out fine…but that’s another story.

Now, here I am looking through piles of old photos because…well, I don’t know why. And here I see a picture of Julie and Ruthie. It brings me back. I should hate this guy, but I miss him.

This story is a surprising homage to the black sheep of the family and the lessons we learn from them. I know what he would say if Julie were alive to read it today…

“Throw a flowerpot out of the window, and you’ll kill 10 bloggers at the same time.”