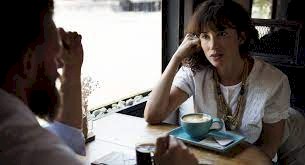 Hearing about your gall bladder while I’m eating onion soup is more than unpleasant. It is hazardous to my health. Yet, almost daily I am assaulted with medical talk at lunch, at dinner—almost anywhere I go for a bite.

Just stop with med talk while people are eating.

Yes, I know there is such a thing as freedom of speech. My favorite subject at NYU Law was constitutional law (fondly called Con Law). I believe that Thomas Jefferson himself wrote:

“There are two instances where freedom of speech must be curtailed. One is shouting fire in a crowded theatre. The other is describing the removal of your cyst while your companion is eating parfait.”

Yet, med talk at the table is an epidemic.

If folks have no ailments of their own, they regale us with other people’s health problems…talking about their aunt’s arthritis or their uncle’s dementia. I call this Rudeness by Munchausen, people bringing attention to themselves through someone else’s crisis.

At a recent Chinese meal, the lady at the next table graphically reported on the condition of her friend after being mauled by a bear…hand to God. “They call them the black bears of Florida. Her face was eaten, and she stayed in the hospital a year. Every bone in her body was broken. She decided to move back to New Jersey.” I was not surprised to hear of her decision.

Yes, I understand that I should not be eavesdropping.

Well, yes and no.

With freedom of speech must come freedom to listen. It’s my right. You cannot have one without the other. If you insist that folks talk, you need also to defend folks’ right to listen to what others have to say.

Because I have that right, I marched over to the guy at the next table who was describing the nature of his fungal infection in every gory detail. It had lodged in areas of his body that I have too much discretion to mention.

“You are speaking loudly about very intimate things. Could you lower your voice?” I said. I was rather sheepish in my tone. He was not. “It’s a free country.” He shouted.

I sulked back to my chair and looked dubiously at the fried fish. What fungus lies beneath the batter?

This problem is compounded by the continuing trend of piling tables and chairs in restaurants so close—or even seating strangers at communal tables—that it’s impossible not to overhear other diners.

Now, if you think I am over-blowing the issue, not so. I have studied this. The highly descriptive and off-putting health talk most always comes from boomers and the mature, giving us a bad name with other generations.

I was brought up in a family that sat down at a table and the first words heard were, “Guess who died.” So maybe I am overly sensitive. But, young people get a skewed view of what is means to be older if they constantly hear how lousy we feel or the details of our last procedure.

You won’t hear a word about cholesterol coming out of the mouths of millennials at Cheesecake Factory or Wingstop, although they are systematically raising their levels (and giving themselves diabetes) with every bite. But, you will hear about it when they get to our age, unless we stop the madness now.

Here’s how it works. Our gastrointestinal tract is also called the “second brain.” The gut is controlled by our nervous system and the neurons that comprise it. The gut releases stress hormones that affect mood and cognition.

So, what the brain thinks, the gut feels. And if the gut is assaulted (listen to someone describing nausea and you will get sick too), it stresses the brain. Stress can produce stomach acid, ulcers, diarrhea or constipation. In turn, gut issues can send signals to the brain that increase your chronic stress.

The CDC should categorize chronic health talk as an epidemic and appropriate federal funds to stop it.

Today, everyone has a suggested doctor, a better pill, the discovery of a new disease. Everyone had a non-invasive procedure that went wrong or a piece of their skin out for a biopsy.

Recently, I have noticed that people are moving up a level in disturbing conversations and peppering (pun alert) their meals with death talk. The disintegration of the body was the fare at one dinner party. Sad to say, my husband had ordered the steak tartar.

Since I often eat alone and loath this brand of table talk, I found a personal solution.

I wear Bluetooth earphones and listen to music. I bop to Dvorak during the amuse bouche and end with a soothing Joplin with after-dinner mints. I favor Pavarotti and Prosecco, Weill at brunch and Gilbert & Sullivan any time.

At one meal, the music bled through my headphones and bothered the folks at the next table. The man asked if I could turn it down, as it was spoiling his meal. I replied, “It’s a free country.” Indeed.