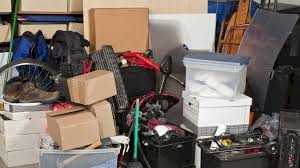 In her best-selling book, The Life-Changing Magic of Tidying Up, Marie Kondo suggests we downsize by keeping only the things we truly love. That’s sounds wise, except that as we grow older, it may be the very things we do not love, even hate, which we feel compelled to keep.

First, there’s the stuff our now grown children left behind when they went off on their own, and which they will never, ever take back.

My daughter Rose may have left for good, but Teddy Ruxpin is still here (as are Rose’s rollerblades and massive collection of Playbills.) My son hasn’t lived with us for 20 years, but his personally autographed copy of the life of Barbara Bush turns up on holidays and on the other rare occasions when I dust the bookshelves.

Next, there is the surviving detritus of other lives, well lived but long gone.

How can I ditch my father’s old desk, his ribbon for Class Pest, my mother’s Persian lamb coat which she wore every day, or Aunt Rose’s now mildewed Singer sewing table? Frankly, I fear reprisal in the form of grief, regret or curses from the grave.

An astute interior designer friend of mine calls my credenza and other sacred ancestor furniture (none of which fit my decor) “Mom” and “Pop.” I bet you have a Mom and a Pop noosed around your neck, too.

Finally, not everything we are saddled with can be blamed on other people. We also have our own Hall of Shame and Hall of Fame.

On the Shame side are furs, ivory jewelry and maybe even blood diamonds. No one paid attention when we bought these things in the old days. These are different times and we have evolved.

To get rid of them in secret Shame, you must bundle them into black plastic bags (biodegradable please), stuff them into the trunk of your car in the dead of night, and risk going under suspicion as a true criminal if a surveillance camera spies you.

Perhaps hardest to ditch are the items in our personal Hall of Fame. We bought all kinds of nifty stuff in the ’60’s, ’70’s and ’80’s they now call “vintage” and that may be worth money. We will surely sell them on eBay, Etsy or on consignment. At least that’s what we promise ourselves. One day we will have the time. In the end, the stuff sits there, waiting for our children to make them “Mom” and “Pop.”

Can we be the generation that breaks the stuff cycle? I think we can. But it won’t be easy.

First, we need to acknowledge the deep psychological connection between people and stuff.

Even cavemen had stuff, or else there would be no archeologists. Real professors have conducted a study about stuff to prove that we can be damaged and depressed by losing things as well as people.

So tread lightly as you divest yourself.

Ask first, “Do I use it?” If the answer is “No”, put it on a hit list. Next ask, “Does anybody want it and will appreciate it?” If so, give it to them. Things owned by the folks you loved should go to people who will love their things as well.

I get pleasure out of giving my formerly-fitting designer clothing to amateur production companies and donating books to the library. I gave my aunt’s collection of old buttons to the local sewing club, and my friend got an entire suite of Victorian furniture. Yes, it was worth several thousand dollars. But the thought of her regard for these pieces gives me a warm feeling that I did right by Aunt Rose.

If no one wants the things you don’t use, sell what you can and donate the rest.

The remaining items are ready for bagging and pick up by Vietnam Vets, Lupus Foundation, Big Brothers and Big Sisters, and the many other worthy charities that take stuff of most any kind. (Several toilets and wood flooring went to Habitat for Humanity…and they were thrilled to get them.)

And what of the items with which you still can’t part, yet never use?

Don’t delude yourself. You will never use them. At least not in their present form. So maybe you can change their form. The RHS Garden Harlow Carr in Harrogate, England use shoes as planters. I reconstruct old jewelry to be more to my present taste. A friend cuts up old fabric and makes tote bags as gifts. See what inspiration you can muster.

OK… you now have less, but if you still feel stuff-bound, there is a temporary solution…STORAGE.

Storage costs money. More’s the better, as that will force you to be judicious.

What’s left, you keep in storage or find a place for at home.

You’ll never get rid of everything. After all, few of us were born to be minimalist. But, let us try.