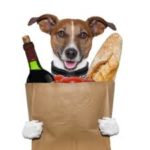 My friend leaned over the table as if to impart a great secret. “Do you think the waiter will believe that I am taking the pastrami home for a raccoon?” She spoke in a conspiratorial whisper. And indeed, she was revealing a deep dark secret. After decades of chuckling at the antics of elders who piled dinner rolls into their purses and packets of sugar into their pockets, we Boomers are doing it now, too.

I can remember my Aunt Annie bringing an old New York Times to every wedding and bar mitzvah. Her modus operandi was to roll the pages up in a cone, like fish and chips from a London food stand. Then she would eye the banquet hall as if to case the joint for a robbery. Next thing you knew, all the better leftovers were piled high in the paper “for later.”

My mother took food home, too. She used tinfoil—the days of take-home containers were not yet upon us. My mom was delighted the first time a waiter asked her if she wanted a doggie bag. What a great cover for the true intent of heating the leftovers up for lunch the next day. By the late 1950s, in my neighborhood in Brooklyn, the idea of taking food home was becoming a bit déclassé. After all, the war was over, the economy was booming—if you needed to take home food, it must be for the dog.

Has anything changed between the generations? Are we motivated in the same way to take food home?

Because of the Depression, our parents’ generation faced real hunger. As the Greatest Generation became more prosperous, they remembered the empty stomachs of the past and were hell-bent on never wasting food…or most anything else. Their Boomer kids called it “The Depression Mentality.”

It went further than taking home a leftover nibble. It also meant parsimony across the board. For example, my aunt made all of my mother’s clothes during the Depression. This carried over to her making my Halloween costumes and hemming my skirts. To this day, I wish I could afford a tailor of that quality. As that generation fades away, their thrifty habits have resulted in a transfer of wealth in the billions to Boomers. Yes, we had a laugh at Aunt Annie. Now we spend her savings on our trip to Machu Pichu.

Yet here it is 2020, and like my mother before me, I, too, take food home from restaurants. To me, the doggie bag remains one of the last nods to conservative spending, to the afront of waste…a beacon of material sanity.

I used to delude myself into thinking that I would eat the food in my doggie bag. But after three weeks of neglect, it would turn so green that I couldn’t consider putting it in my mouth. If you tend to travel weeks on end, don’t bother to take anything home for later. There is no later, except if you want to run a research lab that needs moldy petri dishes.

But still, I take food from restaurants. I leave the bag on the street near the dumpsters and along the buildings where I know the homeless frequent. I feel good…but do I?

I am aware that doggie bags Boomer-style are a bit, well, self-indulgent. The only reason I need a doggie bag is that today’s portions are just too big. When did restaurants get the go-ahead from customers to offer ever larger, ever more calorie-loaded platters? Boomer consumers must have voiced the demand for gargantuan portions through some buying-habits research survey. Once the McDonald’s quarter-pounder came on the market, there was no turning back. Comedic folksinger Allan Sherman, said it for us in song—“Do not make a stingy sandwich, pile the height of the cold cuts high. Customers should see salami coming through the rye.”

My friend’s pastrami sandwich at Junior’s restaurant in Brooklyn could feed the entire cast of The Lion King, let alone little Skippy the racoon from New Jersey.

But while the doggie bag may serve to hide our gluttonous shame, Boomers are now wracked with environmental concerns over the doggie bag.

The Green Restaurant Association has more than 100 member establishments in 20 states. The association worries about the effect of the doggie bag on the planet and support biodegradability.

In his thoughtful article, “Doggie Bag Dilemma,” Dan Oko tells us that, besides adding to our bloated landfills, doggie bags can cause cancer. “I’m surprised how long it took me to realize that restaurant doggie bags and to-go boxes pose a serious problem. Moreover, the fix calls for more than just recyclable foil swans. Most to-go waste finds its way into landfills, and energy hawks worry about the cost of producing and disposing of paper-based containers, such as pizza boxes, while other concerned citizens fret over the carcinogenic fallout from chlorine and polystyrene, a petroleum-derived material commonly encountered in Styrofoam containers.”

Oy vey. This is terrible! All this prevention of waste is costing us more.

Maybe instead of taking restaurant food to the dogs, we should take the dogs to the restaurants. Indeed, many restaurants are now meeting dog lovers’ demands for Fido-friendly meals. Shake Shack’s Woof Menu offers a Bag O’ Bones—five dog biscuits—which will set you back $7.50…and Pooch-ini, biscuits with peanut butter sauce and vanilla custard, ominously warning us, “this is not for small dogs.” The menu is silent about raccoons.

In Berlin’s restaurant, Treats for Pets, the menu is just for dogs. People are not served, except for a cup of coffee. Furry dinner companions mingle with their colleagues and acquaintances from the dog park to catch up on local gossip. I wonder if the dogs request a biodegradable Boomer bag for their leftovers. Aunt Annie would have loved that.

What About Skippy? Skippy really is a racoon. And my friend really does get joy in feeding him. “I know it’s wrong. But I love to see him happy,” she told me. Here is a quote from her e-mail to me…

I thought the racoon emoji at the end of the e-mail was a nice Boomer touch.