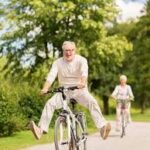 Certainly, there are a variety of good things that older age brings, many of them discussed and explained by developmental scientists. For example, we are supposed to become more transcendent of the world around us, less ego-driven and more focused on our legacy. At least so said sociologist Lars Tornstam in his theory of gerotranscendence. So, too, we are supposedly on the cusp of greater wisdom as we pass 70. Read my recent blog for the full, somewhat controversial look at elder wisdom.

Frankly speaking, so far at least, I have enjoyed none of these boons as I glided past 70 into 71 and soon 72.

What did happen, however, was I began to look exceptionally good in hats. Here is the humble proof…

Now, when I was a slip of a girl of only 65, I had not yet acquired that magnificent Queen Mother look that gives one the impression of aging royalty. A hat might cover a wrinkle or bring me into better light, but it did not serve to make me seem enigmatic, as it does now. I have become a romantic figure in a hat. Hats are head turners on older women, but sadly merely ornamental and a touch silly on the young.

I recently saw on the website Sixty and Me an interview with Judith Boyd, aka the “Style Crone” and a former psychiatric nurse, on the subject of women’s passion for hats as we age. She mentioned cancer, hair loss and hats that cover baldness. Indeed, many years ago, I accompanied a friend who was getting Reiki at Beth Israel Hospital in Manhattan as part of her cancer treatments. One of the fascinating features of the cancer-recovery floor was the retail establishment that was a hat shop. It sold both men’s and women’s hats.

Hats are therapeutic, outgoing and anti-ageist. Why? Because they overtly say, I am here. Not invisible. Try to make me disappear, and I’ll spite you with a hat that cannot be ignored.

I have visited 82 countries so far. Despite COVID-19, I plan to travel as soon as allowed by law. But as I age, I become more and more a traveler rather than merely a tourist. I enter the bones of a place…I become an inhabitant. I am not alone on this. Airbnb —embodying that ultimate ideal of living in a place, not merely visiting—is an elder-boomer phenomenon. So much so that President Obama invited Airbnb, along with Uber, to attend the 2015 White House Conference on Aging to emphasize the growth of the sharing economy as a purely boomer-driven market sector.

Then, too, intergenerational family travel takes on greater meaning when you yourself represent the oldest generation in the group. That continuity of life, which goes far to assuage the fear of its ending, is most sweetly pronounced during family vacations. Memories are as deep as your first kiss or your first look at the Eiffel Tower.

For boomers, even the family vacation must be accompanied by “an experience.” In fact, the concepts of experiential travel is part of the travel industry’s lexicon when describing trends of older boomers, who, like me, were born from 1946 to 1950. Lately a new term, “authentic travel” or “immersion travel”—the desire to meld and be part of the culture, cuisine and life of the area—is associated with adult travel.

Now this gets a bit edgy. Remember the great line purportedly expressed by Oscar Wilde and many wise others—“Do what you like only don’t scare the horses”? Well, after 70, sex becomes another thing that one can enjoy without taking one’s temperature and wondering if the drugstore test kit will turn red or blue. No concerns any longer that “we’ve lost it,” as we often had in our postmenopausal years.

By 70, we are reconciled and fully understand which ships have sailed and which remain afloat and are seaworthy. Moreover, sexual tolerance is the peculiar bailiwick of elders, as we understand any port in a storm, to maintain the nautical allusions. Plus, there is not much by now we either have not tried, pledged to never try or planned to try before the final curtain.

As nothing is much of a surprise, we can vicariously and tolerantly take extreme joy in the loving of others, whether on screen, on the stage, in a book or in bed. We wear a perpetual broad smile when we see any type of love, having lived long enough to understand its rarity.

We know by now whether we are a minimalist or a maximalist. And our surroundings suit us as never before. Although downscaling isn’t easy—check out my advice and solutions in this blog—your home and your closet do look better afterward.

But there is a lot more to “senior design,” now called “universal design.” Why? Because what started as a concept for design that is accessible to seniors is now understood to be beneficial for all ages.

Health-care design and hospitality design have merged for that luxurious bathroom and bedroom that feels like a luxury hotel. Even down to the mattress for better sleep, an essential for healthy aging, interior design is simply better without baby puke adorning the fabrics.

You are likely to be richer after 70 than before—for two good reasons. First, 70 is the age when the highest Sociel Security is attainable, and many workers wait until that age to collect. Second, 70 is the usual age that a pension is maxed out, following the Social Security model.

So, at age 69, you may not have those two basic sources of passive income. By 70, you do. In fact, between 2013 to 2016, there has been a large surge in wealth mostly to folks over 75. According to Forbes, citing the Federal Reserve Board’s Survey of Consumer Finances…

What’s more, people older than 70 are still working. If that sounds unrealistic, it’s not. And because of this, the US government passed the Secure Act to allow for IRA contributions at any age so long as you are working. There are a whole host of new regulations, mostly tax-oriented, that were passed in recognition that many boomers will be collecting Social Security, pensions and working well after 70, making their incomes much higher than that of younger folks. To get the full report, see my blog, “Are you Financially SECURE?”

Certainly, there are have-nots at all ages, and we must not be sanguine about the future of aging and wealth in a society where retirement could last 40 years. Ageism often prevents healthy elders from working. But know this—since the 1980s, poverty rates among seniors have consistently been much lower than those among the young. “In 1966, 28.5% of Americans age 65 and older were poor; by 2012, just 9.1% were,” according to the Pew Research Center.

So if you are wise, you will save when younger and plan to rejoice when you reach 70.

Here’s the punchline—live so you want to reach your 70th birthday.

Do you want to make your life better right now whatever your age? Remember how long life is. Don’t sweat the calendar. Take care of yourself, your pocketbook and, above all, your hat rack. Make sure you get to 70…it’s mostly in your control.

So why not live like the best is truly yet to come?