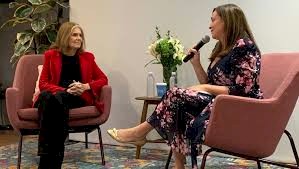 I recently had the opportunity to ask Gloria Steinem, the iconic feminist activist, about the nexus between ageism and sexism.

My exact question was, “Do you think the same protocol that fought misogyny and advanced women’s rights can be used to fight ageism?”

The 85-year-old Ms. Steinem derailed me with her answer…

“Of course, we must use the same strategies, because they [ageism and gender inequality] are the same thing. So long as we are regarded as only our bodies and only objects of procreation, we will be marginalized as we age, because we can no longer produce babies. We need to be thought of as minds as well as bodies.”

Ms. Steinem pointed to her temple with an unconscious gesture that marked the location of her considerable brain.

I looked around at the setting that gave me access to Ms. Steinem. It was the July 2019 meeting of the American Medical Women’s’ Association International Centennial Congress. More than 1,000 female doctors from all over the world attended. Amidst a rainbow of flags, I chatted with a cardiologist from Mongolia…an internist from Taiwan…a surgeon from Zambia.

We were hundreds of feminists of a certain age, what women’s studies courses call the Second Wave, like the German physicians I met who call themselves 60 Over 60.

So, why hasn’t the anti-ageist movement allied itself more closely with those fighting for gender equality?

Of course, both men and women in the anti-ageist movement have long recognized the intersections between ageism and sexism, well stated in Oxford’s Gerontologist…

There are barriers to making ageism part of the feminist agenda.

First, younger women must identify ageism as their cause as well. Perhaps as eloquently stated in Feministing, they are afraid of facing their own aging. Second, older men and women must speak out about positive aging to make clear that it is worth getting old!

As a coalition we can strengthen tactics such as…

Boomer women and men need simply to remember back a bit to recall how we united to create change.

My first taste of gender inequality came in 1965, when I received a letter from Harvard University congratulating me for being number 11 on their 10 female applicant quota list. Years later, when my daughter and I visited schools, it was hard for her to fathom that Princeton and Yale didn’t take women until 1969 and Dartmouth until 1972.

By the time I entered NYU Law, a scant three years later, 20% of the entering class were women.

Fodder for our militancy were books like The Second Sex (Simone de Beauvoir 1949), The Feminine Mystique (Betty Friedan 1963) and The Female Eunuch(Germaine Greer 1970), which I read while studying for the Bar Exam. These were feminist manifestos that inspired us to action.

Gloria Steinem’s Ms. Magazine was in full swing. Everyone was talking about women’s lib, oppression and change.

I can remember being sworn into the Bar by an appellate division judge who acknowledged the many women in the group, only to add that, “we were so decorative.” We merely snickered and trotted off to break the glass ceiling. Now women are top doctors, judges and C-Level executives.

Perhaps Boomer women let down our feminist guard and with that our willingness to make a stir about ageism—what would Gloria do?

She would start by making the connection between body issues (vehicles of procreation when young…presumed useless and disintegrated when old) and the twin plagues of ageism and misogyny.

You need only view the Always Pads–sponsored video You Throw Like a Girl to appreciate the degree that negative cultural perceptions about women can be an assault on the self. So, too, with our abysmal images of aging.

It’s time to drop the giddy charm when we suffer an ageist comment. It’s time to adapt the uncompromising warrior mentality that comes with being fed up. It isn’t pretty, but it works. Witness the growing number of women in politics and the growing legal claims around #MeToo (sexual harassment) and #TimesUp (discrimination in the work place) that get heard in the courts, in the press and in the court of popular opinion. This new generation of feminists know how to make noise on social media that counts.

Organizations that I support—Gen2Gen, WeAreWithIt, Leading Age, the American Society on Aging and AARP—all are doing their part to fight ageism. But you don’t see politicians campaigning on a platform of anti-ageism or the press intensely covering ageist issues. Most people in the press are young, and their advertisers target young adults. No wonder the media doesn’t do an expose on ageism in America.

And indeed, advertisers are not cleaning up their act when it comes to ageist images. You can count on your fingers the number of celebrities who have made ageism their cause. Not surprisingly, Jane Fonda, a political activist, is one of the lone voices.

We need more than impressive TED Talks to stamp out ageism.

As a Boomer woman I see the possibility of a coalition between young women, like my daughter, who speak up and older ones, like me, who carry historical experience.

And what about men? Well, many have discovered that feminist goals are theirs, too—better places to work, two-paycheck families, paternity leave, insurance coverage for domestic partners and acceptance of sexual preference were carried on the wave of feminism. Yes, men get old, too, and so they should be part of our coalition. Boomer men, more than prior generations,  know they benefit when women unite.

When issues of ageism are a visible part of the feminist-rights movement, older women will benefit by greater visibility and political effectiveness. And younger women will realize that they are working for their own better future side-by-side with older women, strong as we are, and they will be less afraid of their own aging.

Imagine the potential for change in breaking down the silo between the two movements…now that’s girl power.